‘Pet Hate’ is a funny old term. It sounds like something we like to hate but in reality it is something that really gets our goat up.

Something that many may find trivial or a minor annoyance but for the individual it is something that is disliked intensely and is a constant or repeated annoyance. 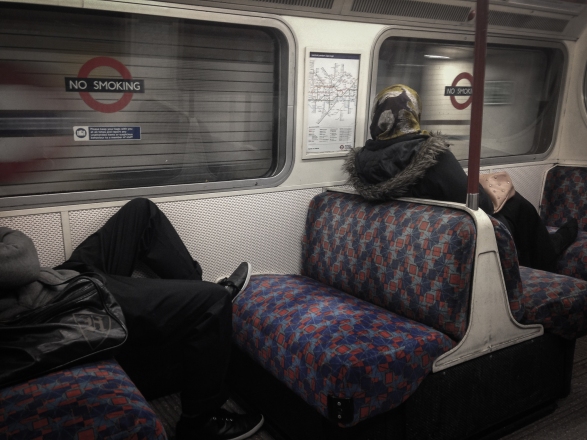 This is actually something that really riles me. I mean it really really does bug me.

I used to make comments to people and ask them why they felt it was okay to walk through all sorts of crap on our cities pavements and then wipe their feet all over the seats where people have to sit.

I also used to point out the faded, ripped seats and the new seats that had replaced the damaged and worn out ones. I’d ask them if they thought the savings made from not replacing these seats that are damaged by inconsiderate peoples shoes, boots….. could be passed on to commuters like us or spent elsewhere on the transport network.

Now I sit there and bristle inside, every now and then one of these unsociable and unsuspecting humans of London makes eye contact and I’ll ask: When you get home at night do you put your shitty shoes all over your own furniture.

They tend to put their feet on the floor and do not say anything. I need to be careful because our society is changing and as someone pointed out the other night, I’m not a young man anymore. Cheeky bloody upstart!

Maybe I should start a photography ‘feet off seats’ campaign showing these peoples faces?!

I hate it with a loathing and yet, for some reason it is fondly called a Pet Hate!