It is the early hours of the morning and I should be sleeping. However someone is snoring (That will be the wife) and that means I can either lay in bed awake or tell you about our short trip to Dungeness & Rye.

But it was great to escape the city and relax for a few days. I also met a photographer called David Purdie whose work I really liked. I should’ve asked if he was related to Naomi Purdie that I went to primary school with. I wonder whatever happened to her? She was always late for school. As was Kevin Skiosk, Skioski or however his name was spelt. They were nice kids but didn’t really fit in. There are very few people from primary school I’d be interested to know how they got on in life, Naomi, Kevin and a Greek Cypriote kid Andreas (Andrew) are probably the only ones out of twenty odd kids that I’d like to know what happened to.

Anyway, David Purdie, I liked his work, got talking and he runs workshops so I shall be having a look at those and checking my diary to see when I can book myself onto one. Dependent on price.

We also met another artist, a sculpture called Stephanie Rubin. She has a great space and is surrounded by other creatives in their studios in a building that was once a school. Her work was great and she was telling us about a commission she is about to start work on. The drawings were on the wall, a sad but hugely romantic piece. I shouldn’t say more than that about it. We’d like to see the finished peice so I will keep an eye on her website.

I’m due to start a 100 strangers portrait project and if I had a flash with me I guess………. I’m making excuses! I could have used ambient light. I should have asked to take their portraits but then I haven’t finished my 100 candid stranger yet. Just five more to go.

Rye! It dates back to the good olde medieval times, it lays at the junction of three rivers & it is known for providing ships at times of war in service of the King. It is also known for its involvement with the smuggling gangs of the 18th and 19th centuries. It has a lot of history but I’ll let you look that up.

This deliberate misspelling made me chuckle so I thought I would just share it with you.

This telescope also made me laugh. The gardeners need to get out their sheers and do a little pruning.

As it is, the telescope provided a wonderful close up of some bushes and trees.

Rye is in sussex but not far from Dungeness & its nuclear power station. I wonder if the radiation was affecting all the time pieces in the town or if I was stood on some weird and wonderful undiscovered meridian line?

Dungeness is an odd place. Its home to a nuclear power station, its sparse and I guess it can almost be described as a desert. I thought there was a very slight irony that there is a steam train that runs past the nuclear plant.

Captain UKIP was some way from the sea but one has to admire his/her optimism that their little boat was sea worthy. 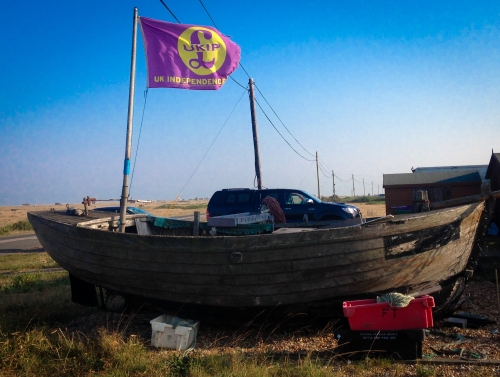 I’m also surprised that we didn’t see any scrap metal collectors. The place is littered with with what I presume are old winches that were used to pull the boats ashore and other small collections of metal.

On a more serious note, there is no shade on Dungeness and it didn’t feel particularly hot when we were there. To prevent burning consider sun screening either with one of the many creams available, clothing or maybe just don’t walk as close to the nuclear power station as I did.

I wonder if I will glow in the dark? 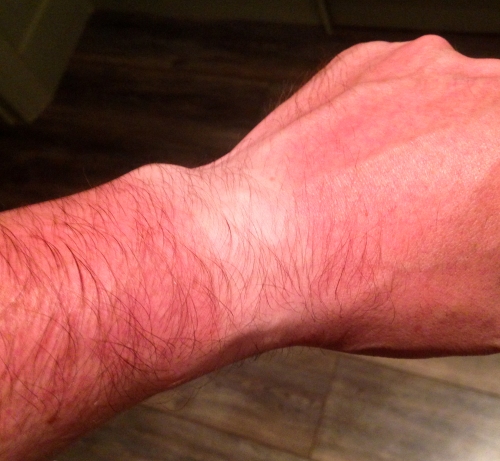 As always, thank you for visiting my blog.