In my last post I mentioned my punk singers portrait & interview project. One copy will be auctioned for charity once it is signed by the artists. I had great fun with that project and it was really good to be working on something that meant a lot to me personally.

I also mentioned The Crème de la Crème this year….

I like the challenge of changing light and movement. If you think its easy to take concert or performance photographs, go try it; especially in smaller venues.

Along with gig photography I have somehow fallen into the genre of portraiture. This is something I did not expect when I started out and thankfully I can say there isn’t anyone I have not enjoyed photographing. I’ve had a couple of shoots where it has felt awkward and uncomfortable, even hard work but the results have made it all worth while.

I’ve even dabbled a little with photo-journalism and been published.

So, that is a little background for those that are new to my page and hopefully explains why I got excited about my latest shoot and why for me, it is The Crème de la Crème so far this year….

I was introduced to someone at The Rambert Dance Company and contacted them with regards to a college project that would include editorial style photography with some portraiture and I was hoping to include full dress rehearsal with stage lighting.

Pretty much giving me the chance to indulge in everything I’ve come to enjoy about being a photographer.

I had a tour of Rambert’s home on the Southbank; clean, organised, minimalist, modern and functional. The few people I met seemed passionate about their work and the performers were being put through their paces.

While I was walking around I could easily visualise the project I wanted to shoot.

Unfortunately they were already mid way through a production and for a number of other reasons the project had to be temporarily put on hold.

Disappointed but with no intention of abandoning the hope of shooting a project with Rambert, I had planned on approaching them later in the year to seek permissions to shoot a project.

Move forward a couple of months…. I have a few days off and I’m getting some equipment ready to shoot a gig. Two cameras cleaned, lenses cleaned and numerous batteries being charged. Then I get a text followed by a phone call and I’ve agreed to a very very short notice shoot. A shoot that ties in with the type of thing I want to do; the type of shoot I thoroughly enjoy. The type of opportunity that only a complete baffon would turn down.

You don’t need to be a rocket scientist to figure it out but just in case you’ve not kept up, it is The Rambert Dance Company looking for a photographer to shoot their performers and senior artists from Mac Cosmetics Creative Team.

I would love to tell you that they had always planned to use me because they liked my work, were aware that I was featured as a canon showcase photographer or that a photograph taken at Illamasqua received over 10.000 hits on the internet within a few days. However, thats not the case. Yes one of the Rambert team was aware of me, they needed a photographer at short notice and I happened to be available.

I’m not going to pretend to be über cool and blasé about the call; I was very excited about it. Come on, how could I not be?!

Then the slight panic that I don’t have much of a brief, I have an idea but I’m not entirely sure what I’m going to need because I’ve had no time to plan.

Like I said, I’d like to say that it was my style and my work that made me the first person they thought of but it was actually more to do with being local and available. Yes it really was that short notice!

Lighting stands and modifiers; what am I going to need? There is going to be a cosmetics company so I guess they will have decent lights…. what if they don’t?

Okay, I decide I will take two flash guns and a couple of lighting mods but I’m feeling a little anxious because I’m not 100% sure what to expect when I arrive. However, I’ve got cameras, I’ve got flashes, I know what I’m doing and my job that provides my main income has taught me to be level headed and pragmatic (apparently that is also an Aries trait). I also felt quietly reassured because I know there is a local hire company that could deliver if I needed anything.

I arrive at Rambert and was greeted as warmly and friendly as the day I was shown around. I’m introduced to their team and given more of a brief.

I ask a little about the production to get an idea about lighting, they are filming so I ask if I can use flash photography and I get the go-ahead.

Due to the make up demonstration within the area I was working there was no room for light stands and modifiers so I had a couple of options with regards to lights. Thats something I have learned and something you will always read, no matter how limited you are with space, kit and options, you do have options and that is why it is important to know what and how to get the best from your equipment.

For me, shadows were going to be an issue but looking at the make up design and the fact the dancers will be under stage lighting I opted for some direct hard light and bounced light; shadows were going to be an issue so it would be best to use them and make a feature of them. Provided the client has clean well lit photographs of the performers, their photo editors would be able to easily deal with back ground shadows if they were not happy with them. 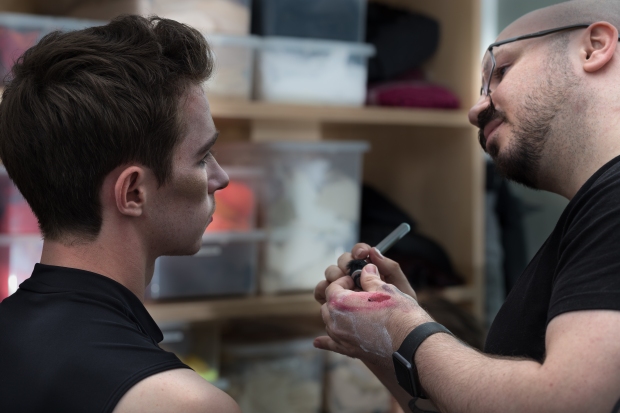 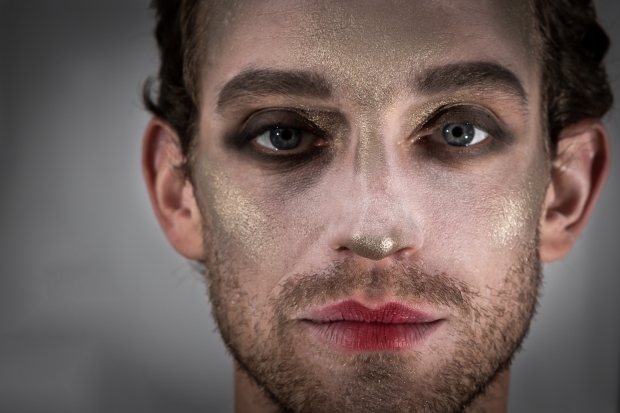 Anyhow, I’ve seen them working hard and as professionals they made it incredibly easy work photographing them. So it seems right I should book some tickets and see the final performance to judge for myself if the lighting aesthetic of the images works with the performance & stage lights.

My night shifts start again tomorrow so tonight is my weekend. Think I might have a wee dram from The Glengoyne Distillery  and catch up with those blogs I’ve missed over the last few weeks.

As always, thank you for visiting my page & have a great weekend.