A friend recently wrote a post about his days in the ambulance service. His post highlights the hardships of going on dispute. But it also hints at the improvements that came about in the weeks following the dispute. His post question whether people in the job today really know what changes were made and the tone of the post suggestions to me that he questions whether an appetite to stand up and be counted would exist today.

Well the ambulance service recently had industrial action over pensions. This was actually well supported. Much more than was expected by management across the UK.

However, in London many staff worked on with apparent disregard for what their colleagues were striking for; better conditions for them all. On top of this, a fleet of yorkshire ambulances made their way to London. I can not comment on the number of calls they responded to but I do know people in the ambulance service and they were in total disbelief that colleagues worked on, that colleagues from another service came to prop up London, I’m told that St John repeated what they did during the dispute that Pete spoke of. Worst still was that the private sector moved in taking the statutory ambulance service one step closer to privatisation.

Some people would suggest that their is a conflict of interest within NHS ambulance services where managers at various levels are heavily involved with private ambulance providers.

One thing I’m certain of is that no one goes into dispute on a whim.

This video clip is a way of ambulance staff getting their voices heard in protest at the increase of the retirement age from 65 to 68 for Paramedics in the United Kingdom. Like 65 isn’t too old!!

I don’t really know how bad things would have to get for a full ambulance dispute. I actually wonder if Pete’s thoughts are right; maybe their is no appetite. Society in general seems content with their lot.

Although there are some people that are dedicated to a cause and willing to make a small stand, I look around and see an apathetic society that desperately needs to be rudely shaken out of its slumber.

The London Fire Brigade recently had a series of short strikes. Short strikes because they felt uneasy about withdrawing their essential service. Yet, they have a valid argument and should be supported by the public. 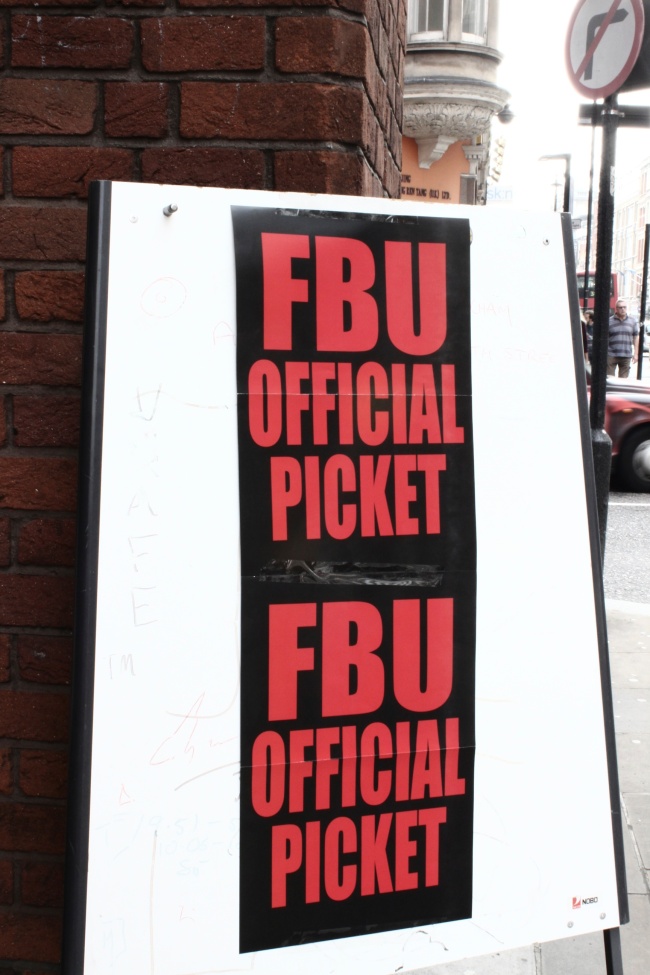 As an image I think the notice tells a story. A clear story but does not give the full picture. I guess from a photo journalists point of view it would need to have accompanying text to support it and/or be part of a series of images. 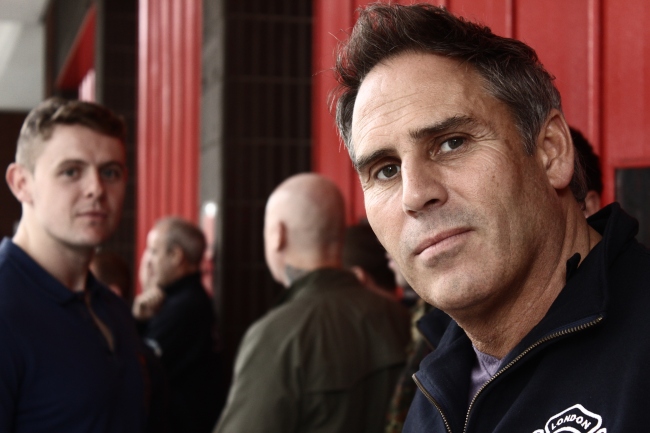 Above: Members of the Fire Brigade Union taking industrial action over pensions. Again I think this needs supporting text or needs to be a series of pictures to give a fuller impression of the dispute.

What I like about this image is that one of the fire fighters is of an age where he has almost given a full service to the LFB and the younger lad in the background has many years of service to give. I think the depth of field also helps the image.

People taking industrial action are not the only people protesting. People protest for political reasons too and some are more committed than others.

Hunger strikers outside the US embassy in London. As far as I am aware they packed up and left with no changes achieved and no fatalities from starvation. They did get themselves plenty of news coverage and in that sense managed to get their message out to a wider audience.

The image tells a story of a protest but I guess it could have more detail. Under the tents the protesters  were in beds. I couldn’t get the exposure right to get everything I wanted so I must remember I have the option of a  flash. Although I find it obtrusive its a tool to possibly achieving a better image. Then again I’m not sure we need to see the protesters?

I got speaking with this chap who is an anti war protester. He commits to different causes and at the time I took this picture he was also outside the American Embassy in London.

I like that the image is a little gritty but wonder if there is just a bit too much depth of field and whether the story would be better told if the background banner was just a tad sharper?

I think just about everyone in the UK knows of Peter Tatchell.

This was taken opposite Downing Street in London. Although it doesn’t give a location I think it tells a clear story and hints at being outside Government premises. I found metering for this was difficult and perhaps should have used some fill flash. However, although the protest is newsworthy the real story here is that Peter Tachell was present so in terms of photography I think it could be technically better but I guess it achieves a desired outcome of portraying a clear story.

The world of photography really isn’t as simple as I thought it would be.

I need to play with the camera a little more and try to get the settings as smooth as an expensive swiss watch.

Thank you for stopping and having a look at my photography diary documenting my learning curve.

As always, please feel free to give constructive feed back and naturally if you feel that any praise is due, that would be warmly received.