Anyone who has stumbled across, or is following my blog will know that I am shooting in different environments and photographic genres. In part to see where I would like to concentrate my efforts but generally to improve my overall camera skills and knowledge.

Those that may have delved a little further and found me on Flickr as well as Tumblr will know that I am taking part in a 100 strangers project.

There are a few different versions of this. I intend on completing the 100 Strangers Portraits, whereby I am required to stop the subject, find out some info about them and with their agreement, take a portrait that they would hopefully be happy with.

Currently I am capturing images for a 100 strangers ‘candid’.

The first few pictures I took made me feel a little uncomfortable but as I relaxed into it, I found it surprising how many people just do not notice you pointing a camera at them.

Anyway, to date I have had no real dilemma regarding the images I use. There was a question sometime ago regarding crashing a pro photo shoot. But that was a while ago and not in the same league as this dilemma that I never thought I would find myself facing.

When we get to the crux of the matter some will think there is nothing wrong with the image and that I am being a middle aged prude and others will pigeonhole my as that creepy photographer.

When I set out on my candid strangers project I made a conscious decision that I would not post any image that I would feel unflattering if I was the subject in front of the lens.

I’ve stuck to that self imposed rule and the following image, I think, is not unflattering nor embarrassing. But has left me questioning whether or not its appropriate for my project.

After long consideration and opinion sought from friends and peers, I decided that although there is some divided opinion, the overall consensus (and mostly from women) is that it is an okay image to use.

Now if I was the sort of chap to wear a mini kilt and I flashed a bit of cheek, the image would be fine. For the record I am a bit of a prude and do not wear a mini kilt, therefore would not find myself in the position of flashing any body part. Unless I got drunk and decided to perform a hand stand. In that case you might get a flash of my six pack that is cleverly disguised as a one pack.

When I went to take this picture the woman was sat on a fence. My camera settings were not set up to capture movement, you can see this by looking at the people in the background. The woman was posing for a photo and it suddenly started to rain, she hoped off the fence where she was perched and I captured an accidental flash.

Personally I think there is a little too much blur in the image to use but I want an opinion from you. Yes you dear reader. I would like your thoughts on the images.

The woman is pretty, she has a figure that I guess some would like to have (one female friend said if she had a backside like hers she wouldn’t mind who photographed it) and she is obviously very confident to wear such a short flared skirt. On those assumptions I’m guessing that she really wouldn’t mind the image being used. However, in case I am wrong, I have blurred her face a little.

This is not the image I set out to get. I think that is pretty obvious.

The image needed to be cropped but now looks a bit iffy and suspect. 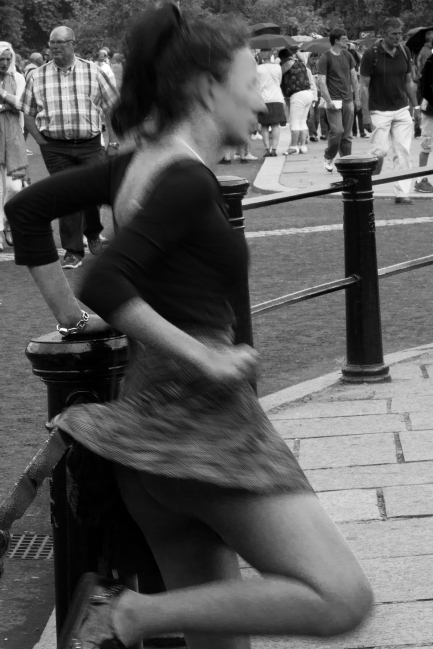 Increased blacks and added contrast to add some modesty.

What I want to know is, if I had a faster shutter speed and the image was sharper, which of these, if any, would you consider suitable for street photography?