I don’t believe in ghosts, spirits, other dimensions or life on Mars. That said, I am not a total disbeliever either. Its just a case that any alternative existence other than what we know as fact has not been proven.

I would actually really like to believe that there is something more to our personal journeys other than the short lives we get to live. (Sadly some shorter than others).

Sometimes things happen that I cannot explain but I just assume there is a logical explanation. Such as my vanishing subject yesterday. Please don’t ask me to explain it ‘logically’ because I haven’t figured it out yet. Maybe he jumped in the bin? Who knows?

The actual image that I took yesterday is unremarkable really. In fact I’m wrong, it is remarkable. I can find lots wrong with it to remark on, such as its very out of focus, the light is not brilliant and the exposure isn’t really as spot on as it could be. But here is the thing, the reason I have chosen to add it to my blog……I had the camera set up for something else, I turned around to carry on with my walk and I spotted the chap in the photo right in front of me. He was making a very definite fashion statement and I immediately knew I would try and get a picture.

I wanted to do this without stopping him and only had what felt like a fraction of a second to try and get my camera settings adjusted. Perhaps in this instance I should have just turned the dial to shutter or aperture priority?

I tried to get the shot and it didn’t work out. Thats just life and part of the learning curve I’m having to move along.

I’m getting better at guesstimating my settings but unlike the great street photographers, changing my camera’s settings quickly is not an autonomic response.

I am however getting into the habit of attempting to capture the image, after all, no attempt= no picture. Where as if I at least try, I will get an image of some description that I can self critique and learn from.

I took the shot and while I checked the screen on the back of the camera, out of the corner of my eye I noticed him sit on the park bench.

The photo was no good so I turned to ask if I could take a portrait of him. I do not usually do this but on this occasion I did because he  fits a project I want to start later in the year or early next year. But he’d gone! Just vanished in the matter of two to four seconds. It was that quick.

To my left was some grass, a foot path, cycle path, a horse bridleway and more grass. To my right was The Serpentine and it looked just as it did when it was on my left and I was walking towards the man.

Behind me was the direction the man had come from and the direction I was  initially walking prior to turning to ask him for his portrait.

The footpath ahead only had light footfall so he would/should have been easy to spot. Especially with what he was wearing. But Nope! He’d gone and vanished into thin air. Just one of life’s mysteries I guess. Either that or I need to head down to the opticians? 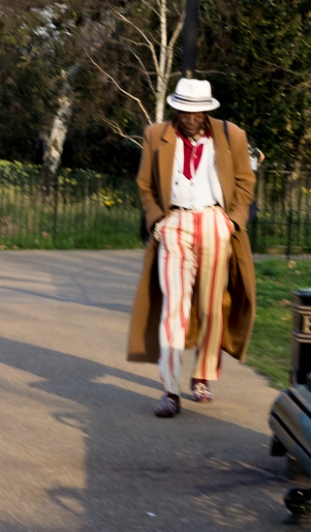 Try to be quicker with adjusting settings.

Not everything needs to be manual and consider using the semi auto camera settings if needed.

Keep an eye on interesting subjects so I can either get the picture I want or find the doorway to some other dimension.