After shooting The Pukes in October 2014 while they recorded a music video I commented that I had some real issues getting clean usable shots and I would like the opportunity to get some better images.

Guess what?…… I was invited to shoot them again.

Yep! Instead of taking my beautiful wife out for a romantic valentine dinner, we had an alternative valentine evening.

The brief was to take a handful of portraits, a couple of group shots and provide some live performance images…..Be set up for 18:30 for the portraits.

So I made a point of arriving early, I had a good walk around and scouted for good locations to take a few group shots. There was an estate across the road that had some lighting in a courtyard and a great wall with a couple of steps that could be used to make sure everyone was visible.

Along at the next corner was a small wall I could stand on if I had issues getting everyone in the image. I found a couple of back drops at the venue for the individual portraits, a black wall and a really nice wooden door.

That is after all what we are aiming for as photographers.

That didn’t happen and some time later, about an hour (ish) they appeared and wanted to do the group photos first.

No problem, however after taking a couple of photos my flashes had stopped communicating with each other.

At this time in the evening it meant the steps were out of question as there was not enough light. Fortunately I had seen a loading bay at a local hotel and had asked the manager if it was posable to use the bay for ten minutes. Kindly he said yes.

I had anticipated that I might need a step and had put one in the car. As we walked one very short block to the hotel it was clear one or two of the band would not be happy to head into the estate or further along the road to the other wall.

After a couple of reasonably safe group shots in less than ideal light conditions it was now time to get the band into a few different positions in the hope of producing something they would find interesting and would be happy to use.

I have a new respect for wedding photographers….. People look in different directions, blink, move and get distracted by onlookers…..“Hells teeth!” is the polite exclamation that rattled around my brain box when I was reviewing the images as we went along.

This is by no means the fault of any band members, they are human and it is just human behavior to be interested in your surroundings and to respond to comments and the distractions of onlookers. (Something I had given very little thought to).

Many of the shots had band members slightly obscured by one-another or by instruments. It didn’t matter how much I said “If you can’t see the lens, I can not see you”, it was just the nature of the shoot. Anyhow, we came away with a couple of images that looked nice in the back of the camera.

As far as camera settings go, I’d have preferred to use a more closed down aperture to ensure sharpness throughout the entire image but with one speed-light and having pushed the ISO as high as was acceptable I had to settle with what I would consider tolerable softness in focus for the people at the back of the photos.

The lead singer and primary front-members of the band are suitably sharp in the images.

Onto the individual portraits and the lovely wooden door now had a shutter pulled down in front of it. Ahggrrrr!

So, the portraits were all going to be in front of the black painted brick wall. Probably just as well. It was getting colder and the band wanted to have time to relax prior to the gig and some naturally wanted to catch the first bands performance.

The portraits felt like a bit of a conveyer belt; getting a couple of shots with an outrageous but well made and decorated prop made by Esme, one of the band members and individual shots without the prop were very informal and relaxed.

Ideally I would have liked to take a few head and shoulder shots along with three quarter and full length portraits. But there just wasn’t time for this and I was still dwelling on the group shots and wondering if I’d captured at least one good image.

So due to the limited time and me stressing myself about the lights meant I most likely didn’t give enough of myself in order to get the portraits I would be really happy with. Not that I think there is anything wrong with the portraits. I just would have liked to have more time with the individuals to make sure I could capture not only something they would find flattering but an image that captures their personality. 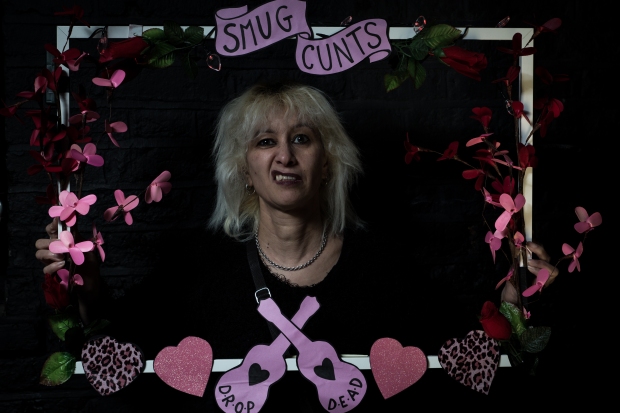 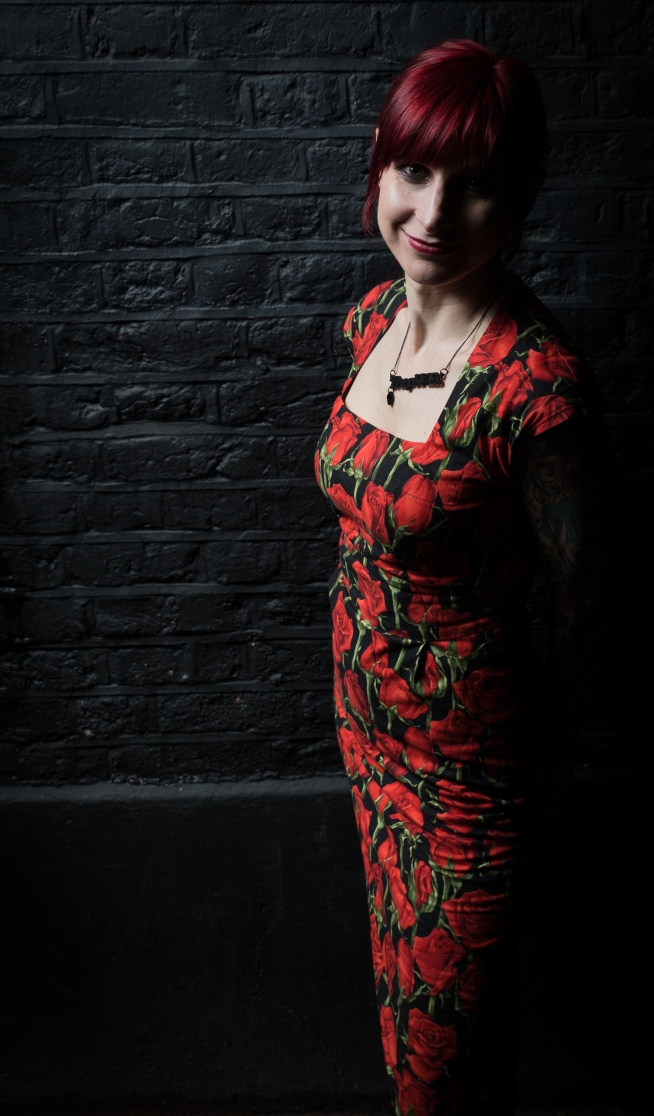 I managed to get a handful of live performance images but was mindful there was a paying audience so kept my time at the front of the stage to two songs and shot without flash.

The light wasn’t great for much of the time and a particularly high ISO was required.

I really enjoyed my short time with The Pukes and thoroughly enjoyed the gig. https://www.youtube.com/watch?v=ml1LDhgjQfo

Well after all of that, what did I learn? Actually, lots!

One useful suggestion from one of the ladies in the band was to give them a little count down to when I was going to press the shutter release button. I’m not sure who it was that shouted it out but it was invaluable and has been noted for the next time. That is if I ever put myself through the stress of large group shots again.

A back up lighting system would be ideal but massively expensive and totally impracticable so looking for alternative spots near the location was a good idea and should be done for every shoot.

Be firm in regards to giving directions and I probably should have just suggested at least one of the other locations. A bit more confidence in my abilities and knowledge of what is needed to produce the best images.

Above all, I do not communicate well when I am being a stress monkey. I need to remember I am fairly pragmatic and that means I will find a way around problems, so I should relax and enjoy the moment. That will also help get the best results.

Special thanks to my better half for her help on the shoot, The Pukes, Peter the manager at RE hotel in Shoreditch and thank you to you for viewing my blog.