You know those great photos that you see…. You know the ones that evoke an emotion, make you stop and think about the image, the story,  the one that just has something about it; that something you may not even be able to put a finger on the exact reason you like it… you know what I mean don’t you.

I watched a short TV documentary shown by the BBC by filmmaker Marisa Murdoch about a photographer called Dennis Morris.

I spotted a number of images that I had seen before and researched a little further into his work.

Not for the first time, as I have looked at photographers other work in the past, I have realised that I have seen and like several images all from the same photographer but had never known it was that particular photographer that had taken any of those particular images that I liked. (I think that makes sense??).

So  in the future I will be making a point of taking a better look at photographers I like.

Dennis Morris had a small exhibition in London and was giving one of these question and answer sessions following an informal talk about his work as a photographer.

Interestingly he was brought up in my old manor where I was dragged up (I wonder if we’d ever passed each other in the street?). Living in sunny Hackney (pronounced ‘Ackney’ by all proper Londoners) might be the only thing we have in common.

Unlike me, Dennis had someone that sparked an interest and enthusiasm in photography. Luckily for him, he also gave him a camera and set him off on his career path.

My careers advisor at school looked at me aged fourteen or fifteen and said ‘Army’!

No question of what I might be interested in doing and advising me on the route I should take.

I ended up leaving school with no qualifications but got a trade, ended up going to night college and later went on to earn myself a degree.

Army! I went to the first school closed by OFSTED. Far too late in my opinion. It should have been closed many many years before OFSTED did the right thing.

When Dennis was starting off as a very young child, film was expensive, so I guess in that respect it is easier for people to access cameras and take more images now. But is it harder to get those iconic shots?

The world doesn’t seem as exciting as it was thirty years ago, London does not seem as exciting. Its not derelict, its sanitised and people seem content with their lot. I’m not sure that anything exciting is going to happy anytime soon.

I don’t know if Dennis ever liked punk or if he was just in the right place at the right time? London was changing, there were various youth and subcultures. People had something to say and did things, people were out and about, people were being creative….. London was very different.

I went to his talk and asked whether or not he thought the opportunities are there for youngsters to start a career in photography.

As a 40+ individual this was just a general question,  I was interested to hear his opinion because I do think the world has moved on so much; especially with technology and it being more difficult to have your work stand out.

Its as easy as anything to get your work seen but not necessarily seen by the people that can change your hobby into a career.

I’m actually happy that his response was that he would just advise youngsters to shoot what they want in a way that they want.

At the end of the interview and Q&A people were invited to go up and have items signed. I didn’t have an old album cover or article so thought I’d push my luck….. I did have a camera with me and asked Mr. Morris to take my photo.

All I am going to say about the photo is that the circumstances were less than ideal, but hey, I had my photo taken by Dennis Morris…. 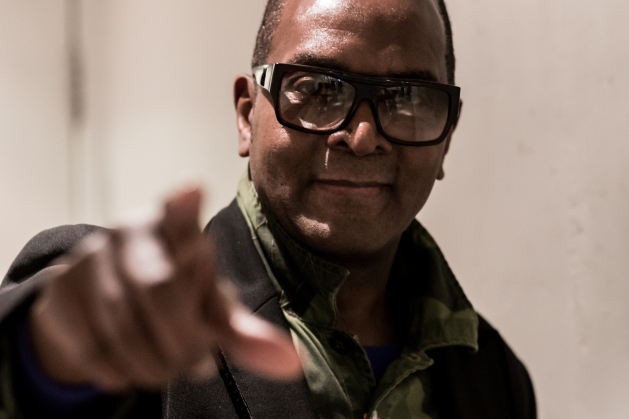 Dennis said he wanted to be a war photographer and ended up within the music industry by chance. With tongue in cheek he likened his early music photography career in the mosh-pit as dangerous as being a war correspondent.

I wonder what his worst mosh pit injury was?

I’ve had a few bruises from the mosh-pit but this scratch was the first time I’ve had blood drawn. The joke of this is that it was a nurse that caused the injury. Well, a nurse wearing a studded leather jacket!

I recently got my hands on a canon powershot G5X and thought I would see how it coped with low lights found in many music venues. 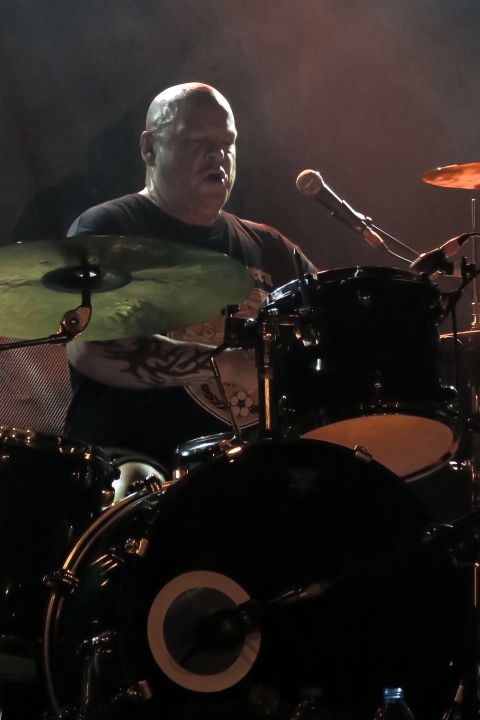 I’m fairly certain I could have got a cleaner / sharper shot if not in the mosh-pit. The image was shot at a high ISO and the only real issues I found were with auto focusing, which the camera had real problems with in this challenging light.

Thanks for stopping and reading.

If you have any low light or gig photos using a G5X that you wish to share please feel free to add a link in the comments.

FAO Dennis Morris: If you happen to read this. Thank you for taking my birthday photo & if you are shooting in London and need a pair of hands from Ackney…. Jim Jimmy James 😉