Twenty-three days ago I wrote Book review #4 about The Photographers Eye by Michael Freeman. I was left with mixed opinions about whether or not the information was going to be of any use to me.

Well it has, I think?

Our class were taken to Leicester Square in London. We were told to go and take lots of photos and then try to focus on one subject so that we could produce and print a small photo-book.

I’ve known Leicester Sq. since my teenage years (that was some time ago!). For me it is nothing more than an overcrowded tourist trap with its bright lights. It has very average restaurants, a couple of bars & the M&Ms store!

There are pick-pockets, drug dealers, people looking for alcohol fuelled punch-ups and some other people milling around that are intoxicated on other substances.

That said there is an obvious uniformed police presence and no doubt a number of police officers in civilian clothing. It is certainly a lot safer than it used to be and as is the case in most big cities, tourists just need be aware of their surroundings and not to leave personal belongings unattended.

So, our class with nice cameras is wondering around this small area that I personally find hugely uninspiring and we are expected to produce a themed set of images.

I suspected we’d all end up with something very similar but I was wrong. I was really pleased to see that we all had very different ideas and everyone had fantastic sets of images.

I’m not overly keen on the images I took but I am going to share a few with you.

I wasn’t doing very well until I spotted Warwick Davis and thought its a good job he had people with him… I’m not a big chap, a little heavier than I should be but pretty average as far as height goes. I get annoyed at being walked into and barged by people not looking where they are going or those that are just too stoned to care who they are walking into; the ditzy, the oblivious and the nonchalant.

I couldn’t stand the thought of being in such a busy area if I was shorter, I think it would feel frustrating and claustrophobic.

I asked Mr. Davis if I could take his portrait. That is probably more annoying for him?! Especially when he is trying to get somewhere. Anyway, he very kindly stopped and posed for a moment.

On one knee I was at his eye level and then I wondered what the view would be like if Warwick Davies had the camera….

Most of the images looking ahead were not interesting and did feel crowded with people but one image I took was framed. Framed looks good I thought to myself, where did I read about framing images with surroundings. Yep you’ve guessed it; The Photographers Eye.

So I had a theme, get low and look for frames. I also opted to keep the focal length at 35mm.

I guess my images were inspired by Michael Freeman & Warwick Davis. 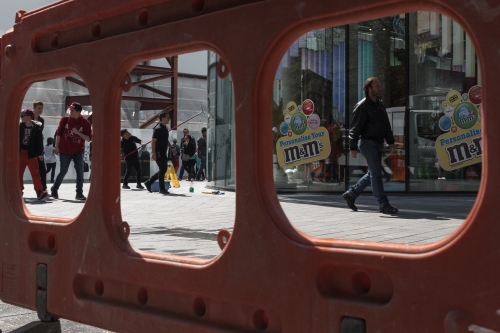 Thanks for taking the time to read my blog and view my images.