I have finished my city and guilds in photography.

This had two main submissions. In each case there were topic areas such as still life, landscape and portraiture.

There were no set in stone rules so landscapes could be the more traditional mountains and fields or could be city-scapes. The only stipulation was that the topic area and theme had to be agreed by the tutor.

For theme one I opted for portraiture of people in the age range of forty-plus years but specifically those with a strong visual identity relating to street styles, youth cultures and sub-cultures that I grew up with through the 1970’s into the 1990s.

The vast majority of the people I photographed were strangers and it took a bit of effort on my part to approach them.

Only one person declined which surprised me. The remainder seemed either bemused or flattered.

Although most were happy for me to use the images in any way I wanted, some have stipulated that they would be happy for me to take their portrait and use prints for my course work but they did not want them published in any public forum.

I was able to photograph some Punks, Skinheads, Mods, Scooterists, Rockabillies and Rudies but didn’t find the full range of street cultures that I wanted to.

This was partly because of the time of year and there being no major events that would bring large numbers of particular groups together. I also had some issues around time management; primarily having a full time job that involves some rather unsocial shift patterns.

The dark nights and poor weather meant that when I did spot someone I wanted to photograph it was in poor outdoor lighting or inside pub/club/concert venues.

I found that this restricted me a little as I did not have a good working knowledge of using small off camera flash or lighting modifiers. Going to some of the venues I wanted to travel light and not be weighted down by having lots of kit.

The following two portraits are examples of the work I submitted.

Biker at The Ace Cafe in London.

I suspected I would find one or two bikers at The Ace but did not expect to get any portraits. The only person to decline was a Hells Angel patch wearer. I have limited knowledge of this group but know they keep themselves to themselves and for that reason I suspected he would say no. No harm in asking and his refusal was never going to be any skin of my nose.

Its a shame he declined but I fully unerstand his reluctance and distrust.

So, I was at The Ace and was actually looking for people with a classic 1940s 1950s rockabilly look.

This biker arrived and looked like he would fit with exactly what I was looking for and fortunately he agreed to be photographed. Once we chatted for a little while it turned out that we had mutual friends in the past and that I may have even been at a couple of venues that his sister occasionally frequented.

The problems I had taking this portrait were the strong contrasting light, I wanted to hint at our location without making the location as equally important as my subject, The Biker.

The location was getting busy and I was limited with composition options and didn’t want to capture people in the background wearing more routinely accepted clothing. That would have ruined the aesthetic of my shoot and removed the impact of my models style and genre.

My next subject is a Mod.

I had been to a number of locations where they are known to meet but again due to the time of year and weather, not very much was going on.

I had met and spoken to several people from the Mod scene but many were a kind of oasis style brit pop hybrid of the real McCoy. Some had the right jacket but the wrong shirt, the clothes but not the right attitude and so on.

To be honest I was struggling until I met David and his good lady who agreed to be photographed.

They both looked the part, not only in what they were wearing but also their confidence and demeanour.

I opted to submit this portrait as I felt it was the strongest of the images that I took with them. 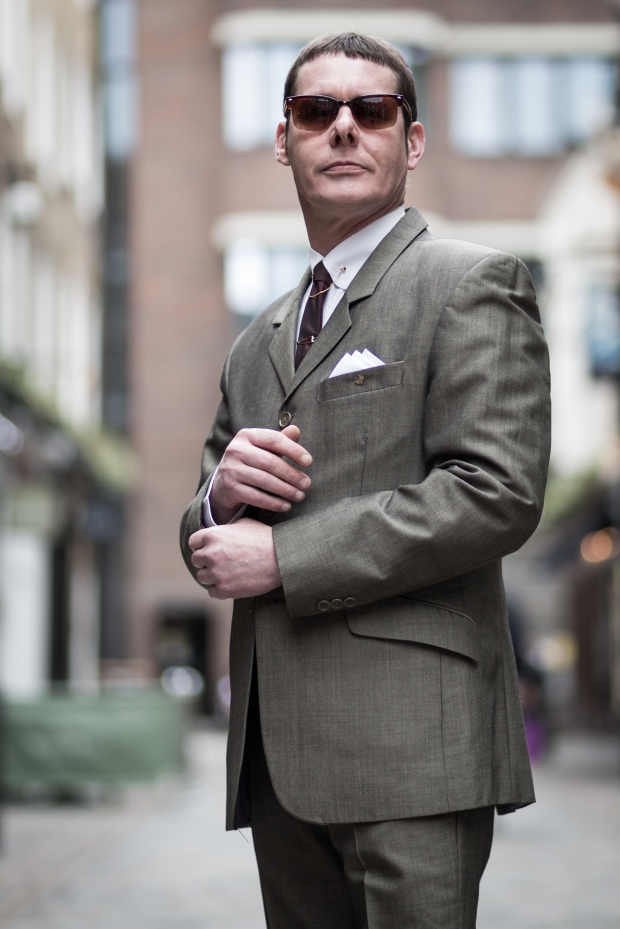 I was very lucky to have meet some really nice people and everyone that modelled for me were simply awesome, relaxed easy going, a dream to direct and just made my job effortless.

Each person that agreed to be photographed were sent jpegs and it is my intention to invite them all to a private showing so they can see the collection in its entirety as well as have a glass or two of wine.

If anyone of the people modelling for me happen to see this, I’d just like to say thank you again. Without you there would have been no project. What ever your genre……. Keep The Faith.

My second project theme was Film Noir. If you’d like a quick preview of some of those images before I make my diary entry, a handful have been uploaded to flickr.

Thanks for visiting and as always your opinions are always welcome.