So we all know that the Television broadcasting agencies in the UK ask for viewers to share their videos of news stories as I am sure happens around the world and the term ‘Citizen Journalist’ has been bounded around for some time.

A while ago I signed up to the Demotix Agency for photographers. I didn’t really use it. To be honest I only put one item on there from an attack on Coca Cola’s head office in Berlin, Germany. It was part of the lead up to the Mayday protests. Some windows had been smashed and I obtained images after the building had been vandalised.

Demotix now seems to have sold up and closed. I found this out yesterday (15/02/2017) when I wanted to upload a couple of images of a protest in Paddington.

French employees of Marks and Spencers had come to The M&S head offices in Merchant Square, Paddington, London.

They were protesting against the closures of a number of stores in France. It would appear that M&S claim that they are not making sufficient profits to keep the stores open and the protestors indicated that they do not believe this is the case.

One protestor that I spoke with stated that M&S are making people redundant so they can re-employ people on zero-hours contracts and removal of current employee benefits. 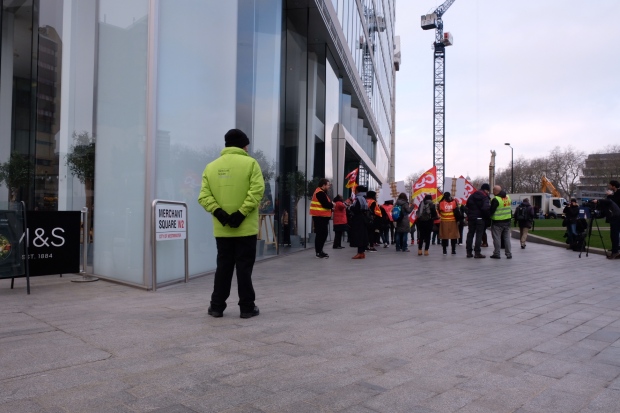 Please feel free to comment on images on the proviso that it is constructive. If you know more about the French M&S situation please also feel free to fill in the gaps using the comments / reply tab and if you want to suggest a ‘citizen photojournalist’ site for me to look at, that would also be welcomed.

As always, thanks for stopping.