As I write this post I am not sure where I am going to go with it.

I’m not even sure if this post is about Me, Photography or something entirely different. However, the one thing I promised myself and anyone interested in what I have to say or how I learn is honesty.

Looking at my images so far it should be clear to most that I am not a professional photographer. I’m not even sure at what point one can be labeled as a keen amateur?

It is all new  to me and like all novices there are things to learn, mistakes to make and things to be avoided.

Currently writing a draft I have been awake for seventy one hours and only had a total of seven hours sleep. So I’m feeling a little tired and I’m ever so slightly miffed with the guitarist of a band that I photographed on Friday evening. The band are called ‘Go Groove’. They are very very tight, professional sounding & definitely worth looking up and going to see them live.

There is a build up to why I was feeling a bit irritated with their guitarist, albeit possibly unfounded. He, Marc Weber has a very impressive online CV, as an artist I personally would expect him & any other artist or performer to have an understanding of someone else trying capture the best images they can of him and the band he is playing with.  Especially since I have heard that his parents are professional photographers. At the time of my first unedited version of this post I did not know if this was true but if it was true, it added a little more disappointment to the unfolding situation for me. Why? Because his parents, like the rest of us would have also started off from scratch and gone through some of the stress and errors I’ve had or am going to encounter. Marc also lists himself as a music teacher. I would assume that he wouldn’t expect someone venturing onto stage after a few months of learning to play guitar to be shredding up the fretboard.

To be fair he wasn’t to know that I am still taking those first tentative steps in a learning process. So this is not going to be a character assassination, that type of behaviour is not in my nature and certainly not appropriate because someone may or may not have been upset because a flash was used.

There was a small build up….. A little while ago I had been invited to capture some work by Miles Davis Landesman, I did this to the best of my ability and Miles was happy with and able to use what I produced. He had no high expectations because it was all very informal but crucially no promises were made.

Through Miles I met Chris Salewicz who found out I was busking some songs by The Clash at The Joe Strummer Underpass and wanted to see for himself what was going on.  This led to me getting a general invite to attend a book reading and signing where Mr. Chris Salewicz was promoting his biography of Joe Strummer from The Clash.

I managed to get a reasonable photo of the event without being obtrusive and a number of people have said they like the photograph. I’m happy with it but as usual would expect to see an improvement in coming months.

Fast forwarding to this week……I found myself in the company of DJ and producer Paul Rudd who very generously invited me to attend a gig he was performing for an England rugby player at The Libertine Club in central London.

All of the above have been wonderful opportunities that I really can not express how grateful I am for the chance to practice my photography at these events.

As a novice I have been fortunate enough to meet genuinely nice people that have had no expectations but surprisingly offered me a privileged position to attend their events.

For Miles the format was video & audio. I am not going to post any images or sound because this was for a body of work and a play called ‘Nico’ that I believe is an ongoing project. I will tell you that it included a number of well known people including Sara Stockbridge (author and 80’s muse of Vivienne Westwood), Cobalt Stargazer (lead guitar Zodiac Mindwarp and the Love Reaction), along with various others…. This sounds like name dropping but please trust me its not. (Hopefully this will be clear at the end of the post).

With regards to Paul Rudd, Here is one photo from his evening:

Paul was difficult for me to photograph because of low light in the club and his high energy. The man does not stop moving. Hopefully I will get another chance to try and get a nice portrait of him at work and maybe by then I will have a better understanding of my equipment and light.

This was the birthday bash of Olly Barkley and there were other known people at the venue. The fact is that like the event held by Miles Landesman, I was not at the club to photograph celebs. They need to let their hair down and relax as much as you and I. So with respect for their privacy I concentrated my efforts on Paul and set about trying to capture an image to show his interactions with his audience and the way he delivered his performance. The photo above does not achieve what I wanted and there is always room for improvement.

From what I have read, in music photography there is a three song rule and no flash. Thats fine if there is a professional lighting rig. Difficult, but workable especially for those with some experience under their belt.

At the night club there were pro photographers using flashes with diffusers & getting some outstanding results. Lesson one this week: I learned while photographing Paul that there are times when the use of flash is the only way to really achieve a half way decent result.

The photograph below is of Jakob & Beukes of Livingston playing in Berlin. This image could also be improved, perhaps by adjusting the white balance. I have posted it because it shows that just a little light helps get an image without using a flash.

So onto Go Groove, playing their gig at an intimate venue without the professional lights found at larger music venues….. During their set I had to make adjustments to the ISO, shutter speed and so on. By the time the band were playing using a flash was in my opinion and based upon limited personal experience, the only way forward with the camera that I own.

I had gone out that afternoon to buy a flash diffuser to soften the light from the flash in the hope of not annoying people. At the venue I didn’t point the flash directly at people and used the ceiling/walls and floor to bounce the flash.

I spoke to the Landlord of the pub and even had a quick chat with the bass player to make sure it wasn’t annoying them. I wasn’t sure so asked my friends a few times if they thought the flash was irritating people or was obtrusive.

The people I was with are very straight forward and would have said yes if that was the case. However they all said no and they informed me that Go Groove had a professional looking photographer with them last month who was using flash photography and apparently not giving a second thought for the audiences view.

Why did I feel a little miffed? I had no intention of taking photos of the band during their second set and was just going to enjoy the performance but I got what I was told was a message from the guitarist via a third party; that his folks are pro-photographers and I should not be using the flash as it is irritating him. My nose was a smidge out of joint and my thoughts were “I assume that’ll be pro photographers with expensive full frame cameras and experience of shooting in poor light”. “Professional photographers that went along the same learning curve that I am starting along.

”      As I have already stated, this is not a character assassination on the guitarist. That is not the sort of person I am. If he had of made those comments he would surely have had his reasons. No doubt those that know him will say that he is a nice person.         But then (this is where I now take a look at myself) rather than feeling irked about the situation I should have made an attempt to chat with the guitarist either before the second set or after the gig to find out if he was finding it distracting or he thought it was interfering with other peoples enjoyment of their performance. Actually I should have hung about to speak with all the band members to get some feed back. Actually I should have introduced myself to the band before the gig and told them my intentions. (Lesson two, interact and communicate).

Generally the band were enthusiastic, looked like they were thoroughly enjoying performing their stuff and had lots of interaction with the audience. They even made my friends night by singing Happy Birthday. A really nice thing for them to have done and appreciated by the people that made up our group. The bass player looked like a proper dude and was clearly feeling the grove and enjoying himself. The singer, Katy Shotter, well, the general consensus was / is that she was flawless in both performance and looks.

For the purpose of this blog I am going to post a comparison between two pictures of Go Groove. One with flash the other without: 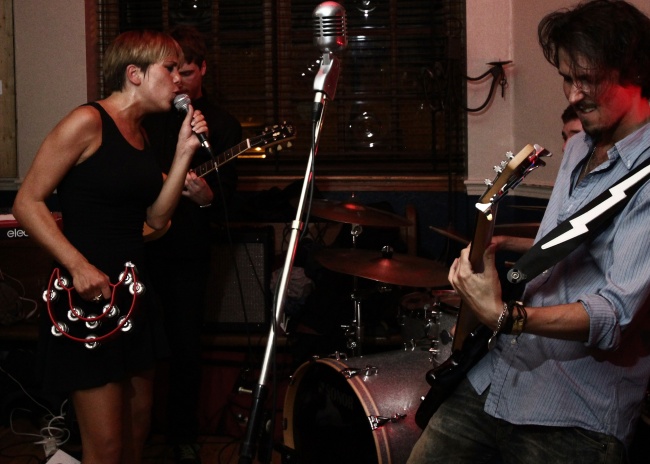 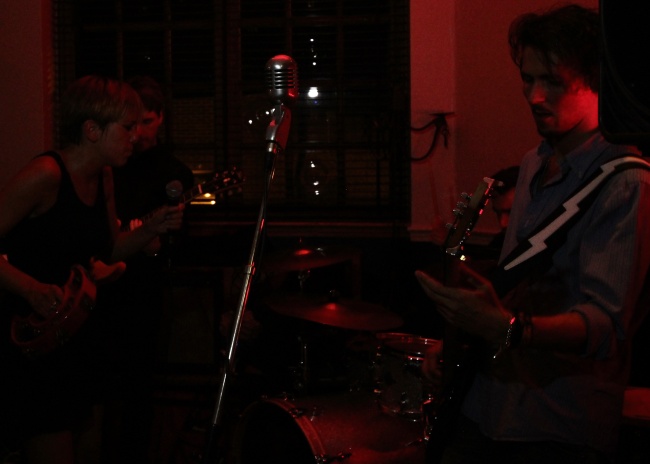 Marc Weber, Guitarist for Go Groove has since been in contact and kindly forwarded the link for his parents website and assures me that he had not passed any comments regarding the use of flash. If you do an internet search for ‘The Elephant of Truth'(I found this by accident) you will understand why I’d rather not get drawn into the ‘He said, She said, They said’ scenario. After all, the only person that knows the full truth is The Keeper of The Elephant. (If that sounds odd, please do look it up).

My big lesson for this week is to take lots of shots in difficult environments, don’t be afraid to use the flash but learn how to use it sympathetically, accept criticism without taking it personally or getting binty and resign myself to the fact that in the future not everyone is going to be happy.

Thanks to Marc for contacting me and thank you for taking the time to visit and read my blog.