I would like to think that the people that matter to me and really know me would consider me to be straight forward and honest. They’d certainly know that the one thing that bugs me is double standards. Especially when it comes to Government, Local Authorities and The Law.

Moving traffic violations in my opinion should be dealt with by the police. Specifically traffic police. I think far too many people are of the opinion that driving is a right rather than a privilege because nowhere near enough drivers get stopped for driving badly (Not enough traffic police).

Speed cameras don’t spot bald tyers, they don’t see people with no lane discipline, they don’t see people speeding between cameras. More police is the only answer to moving traffic violations. I accept that this is not going to be a popular view, especially for those intent on breaking the law. But hey, speed cameras don’t get dangerous drivers or cars off the road. They don’t get the drivers off the road that drive our insurance premiums up either.

Now traffic wardens in London were linked to the Metropolitan Police Service. They were never popular but they did keep London traffic moving and that was their main goal. To some extent ticketing motorists for shoddy parking was down to their own discretion; often giving drivers some leeway and hurrying them to move on.

The modern traffic warden is not really to my liking. Their job is not to keep traffic flowing around my beautiful city but to give motorists a hard time and raise revenue for local authorities.

Don’t get me wrong, if someone parks at a dropped kerb making life difficult for those in wheel chairs and so on; then they are fair game. If they obstruct the public highway then they are fair game but what is not cricket (Thats an idiom like ‘it ain’t kosher’. It means something is not acceptable, its not on) is these little cars with the telescopic cameras ‘spy cars’.

You’ll have your own opinion of cameras with regards to traffic offenses but you must surely agree that this Camden camera car is bang out of order.

I expect people to lead by example and this particular car is parked on double yellow lines.

As far as I know, these spy cars have no exemptions from obstructing the highway or dangerous and illegal parking.

I’m not overly concerned by these cars, mostly because I either walk or use our public transport system which is actually very good.

The images are not going to win any awards but they are just a snap-shot used to illustrate one of the issues that frustrates London drivers.

Its a typical double standard and contradiction; the usual hypocrisy of local authority and government ‘Do as I say not as I do!’

The rear of the car confirms it is most definitely on  double yellow lines. 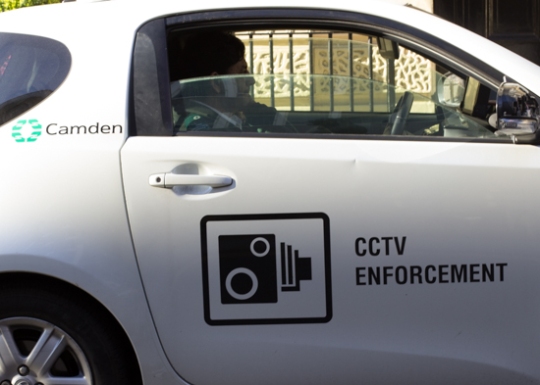 Would you just look at the state of that window. Filthy! Difficult to see through windows that are that dirty. Especially on a bright sunny day. I wonder if that is another traffic offence?!

In the interest of fairness It is not just camden and ‘spy cars’ that wind up London’s motorists but the general privately contracted traffic wardens.

Ticketing ambulances outside an ambulance station. 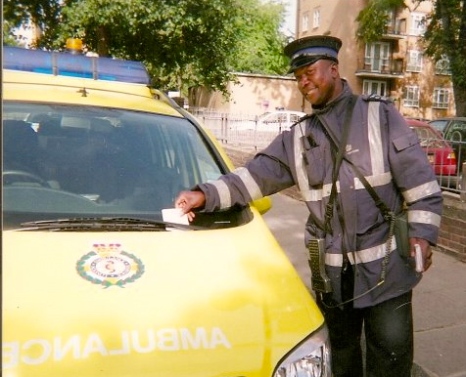 Westminster traffic warden ticketing an emergency rapid response vehicle belonging to the London Ambulance Service. Its always nice to see someone getting a lot of satisfaction and enjoyment in their work.

Please note, no traffic wardens were hurt and the only shooting was done with a camera.

As always, thanks for visiting my page.