While I was out and about at work I grabbed a sandwich & a brew (Tea) at a cafe,  when a chap dumped a bag next to me. He was joined by another fella and a girl.

They opened the bag, the girl started getting some clothes out and the first man (very scruffy in ill fitting track suit bottoms) started setting up camera equipment.

Being a nosy sod I tried to eyeball the kit. A decent looking tripod, the lens looked like it was a 15-80mm, but I couldn’t make out the manufacturer. He wasn’t using a lens hood but did look like he had a clear UV filter fitted.

The camera was a canon but I could not see exactly what it was.

A couple of minutes latter the woman re-appeared dressed in the clobber she’d pulled out of the bag, now showing off her midriff she changed into high heels.

The second chap pulled out two pairs of sun glasses and the couple started posing for photos. You know the stereotypical “wearing sun glasses and looking at the sky” type pose.

I was there for forty minutes before I had to leave and they were still at it, same clothes and nothing else really happening. They moved about two feet away and looked into the camera. That was it.

I don’t know what to think really. I wasn’t overly impressed and it didn’t look terribly professional but then he (The photographer) may have wanted something very specific. Who knows? Also, what does professional look like. He is probably the next Zack Arias and starting off in a coffee shop. It was all no nonsense and he’ll probably have some great images.

It might have been a few friends putting a portfolio together? However, you may surprise me and say ‘those models are so and so, their the next big thing” or “OMG! you know who that photographer is………”

If they had spoken a word of English I may have engaged them in a little conversation rather than just watching.

Good luck to them. 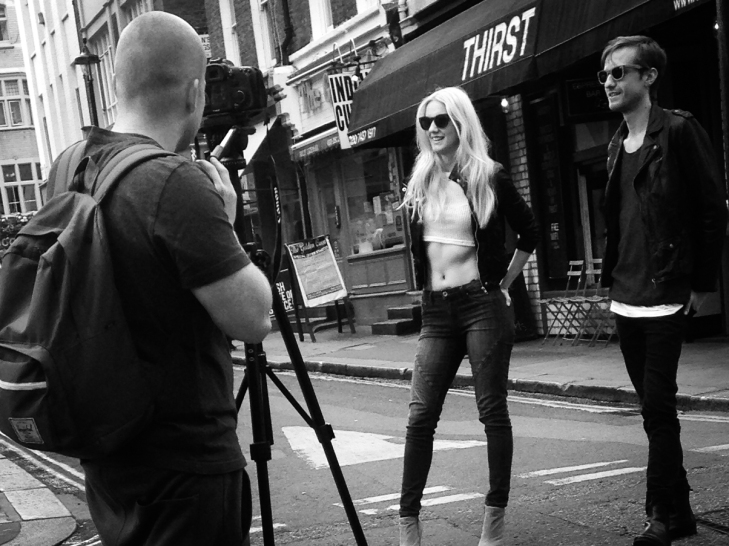