The Spree river runs behind my hotel so naturally I decide to stroll along the river bank to see what I can see.

There was actually lots that I found interesting such as the mixture of buildings from global offices and fancy apartments to squats and Yaam beach, the street art, the city art and people watching; Berlin’s residence and the tourists just like me sheepishly trying to order food and drinks in a new language.

There is too much to talk about and photograph, even on such a short section of The Spree so I will as always try not to ramble or post too many images.

I couldn’t get access onto this boat otherwise I would have been tempted to climb on board and have a nosey.

Its surprising how much of Berlin is derelict and neglected but I guess that is what gives it some of its character and charm; some of what makes it feel like London in the 80s. Its a foreign city that oddly feels familiar.

I’d go as far as saying, that if I was twenty(ish) years younger I would definitely consider a six month move to Berlin with the intention of assessing if relocating would be a real option.

Back to my stroll on The Spree and again another abandoned area that I would have loved to investigate. An old closed down fairground. The fence was only small and could have easily be climbed over but not having a good enough grasp of the language to try and explain my way out of trespassing I went with my head and not my natural curiosity and stayed on the right side of the fence.

So I was limited to taking some pictures where there were gaps in the fencing.

I was later told that the owners of the fairground are in prison serving a lengthy sentence for attempting to smuggle a huge amount of drugs into Germany by concealing them within a fairground ride.

I guess this stuff is going to sit here and continue to decay?

I wonder what the owners will do with it when they get out of prison?

Will they be made to clean the site, will Berlin authorities make some sort of compulsory purchase and reopen the site to the public? 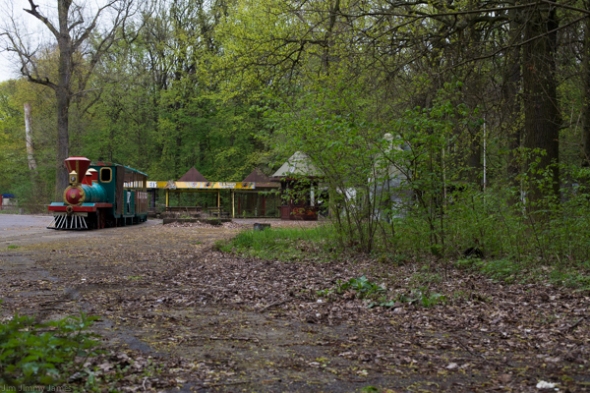 Maybe when I plan my next trip to Berlin (Yes I am definitely going to visit again) I should look into finding out if they ever open the site to nosy people like me.

Feel free to comment on the images and please feel free to provide more info on the park.