I have been set a little project to produce ten images in a documentary style.

Okay, its short notice and with work commitments the obvious thing would be street photography. A genre all of its own & not an easy one. There are some well respected and very talented street photographers out there, some well known and others just bumbling along doing their own thing.

I’ve done a little street photography over the last few months and have enjoyed it. However, I have done most of it from afar with a 70-250mm lens. I’ve managed to get some nice shots but they lack that intimacy that the really good street photographers capture.

A not so subtle way of obtaining street portraits or very subtle?

I guess its one way of getting street portraits. After all if you are taking the image from half a mile away; yes I’m exaggerating a smidge, you’ll always get a reasonable portrait but if you are a long distance away from your subject is it really street photography? I don’t know if it is?

I decided its time to start trying to get up and personal and hopefully without getting a bloody nose!

One thing I seem to read lots is that the more comfortable you look with the camera the less chance there is of coming into conflict with the subjects I will be shooting. So in order to keep my good looks (He said tongue in cheek) I thought I would probably start off with the ‘shooting from the hip’ method. That doesn’t men snapping from hip level but is more of a term used for not using the view finder.

My first outings were disastrous. Really really really very bad. In terms of poor images but a good learning experience.

I read that street photographers prefer to use fixed 35 and 50 mm lenses. I wanted a new lens with a wider aperture so I headed off and got myself a 50mm lens. What I didn’t take into consideration was that on a cropped sensor that makes the lens an 85mm. Roughly! I’m not doing the maths nor am I overly concerned at this stage of my development.

A fixed 85mm lens still feels scarily close to strangers when you are photographing them on their day to day life. So getting the 50mm by mistake is actually a good thing for me, as it will allow me to build some confidence at getting closer to strangers.

So, off I trot. Only to find when I got home that a wide open aperture for shooting from the hip in street photography wasn’t such a good move. Perhaps for those experienced photographers that have a better understanding of their cameras and lenses it would work but not for me. Nope!

Back out again with an aperture of around 7 to 8 (Somewhere in that region) and better results and with some interesting angles.

This image is a little hazy but I’m reasonably happy with it as a shoot from the hip style capture. It also tells a story.

I like the angle of this one. Its much clearer and shows the opposite story the previous image where the guy is relaxing in the warmth of the building and the hazy sunshine while this woman need to get from A to B, do her shopping, drink her coffee and chat on the phone.

I’m just going to put in a couple more images that were taken in the evening. They are all a bit soft and I can understand why I don’t see a great amount of street photography at night. Its an entirely new ball game. 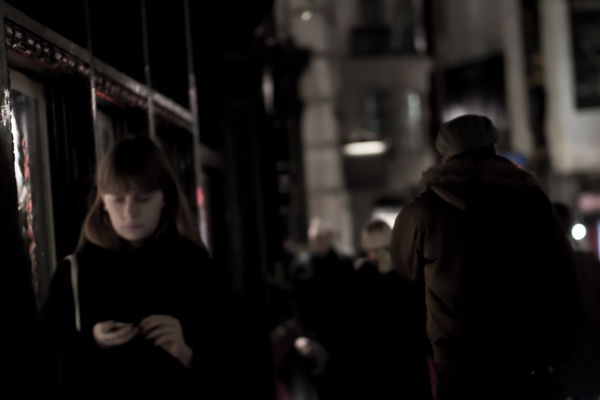 So what did I learn? Light! It always come down to light! Yep its light. Again!!!

Street photography at night needs to be done near well lit bars, restaurants or in areas with great street lighting.  I guess you could use a flash but that would be a tad obtrusive and would make me/you as covert as the chap in the first image. Not to mention irritating for the people you are photographing.

When shooting from the hip, closing the aperture down and increasing the depth of field helped massively.

People are so caught up and distracted by what they are doing that street photographers can actually get up very close without so much as a curious glance from many of their subjects.

As always, thanks for visiting.